Exactly What I Aimed At 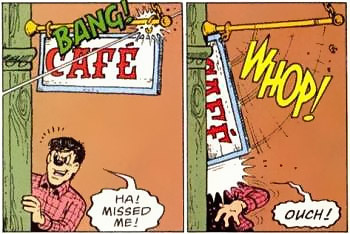 Caffeine'll kill ya.
[Optimus Prime shoots at Dreadwing and misses, sending the shots into a glacier face]
Dreadwing: Your aim is poor.
[The ground begins to shake]
Optimus Prime: That is a matter of perspective.
[Dreadwing is buried in an avalanche caused by the shots]
— Transformers: Prime

The Gunslinger has an opponent in their sights, and fires a shot. But to the opponent's surprise, the shot missed. The opponent takes a moment and sneers at their inaccuracy...

Then the gunslinger points out that they weren't aiming at the opponent, and hit exactly what they were really aiming for: A trick shot that sets off something else (often a chain reaction) that slips past the opponent's guard, and takes out the target in a different way. Bonus points if it's actually far more effective than a direct attack would have been.

This usually involves getting some part of the locale to collapse on the enemy, or cause a slightly delayed explosion. Occasionally, this may be pulled off by someone to capture or disable their foe rather than kill them. Either way, there's usually enough time to see the opponent's reaction as they notice what's actually going to happen.

This trope is so well-known that inverting it by successfully pulling the trick shot, then admitting that they were really aiming at the normal target, is a trope in and of itself: Accidental Aiming Skills.

See also Deadly Dodging, Boomerang Comeback, Pinball Projectile, and Shoot the Rope. Also, it's bad juju to assume someone missed because they didn't hit you, specifically. Contrast Stab the Scorpion. If the shooter aimed at his victim, but was expecting to miss in order to do a chain reaction, then it overlaps with Batman Gambit. For a similarly delayed reaction if the shot directly hits the victim, see You Are Already Dead.

The verbal version of this is Exactly What I Meant To Say, and is more likely to involve a Straight Man, rather than an opponent, friendly or otherwise, than this trope.