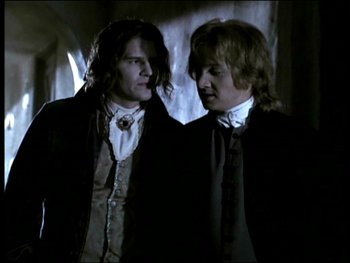 A woman is running though the night, under a bridge. Splashing through a puddle reflecting the moon, and looking behind her in terror, she slides to a stop, eyes wide with terror, as someone steps in front of her, and grabs her throat. The figure uses a metal finger claw to cover her mouth in a shushing expression, then cuts her cheek with it before biting her and draining her blood.

When the figure looks up after dropping his dead victim, it is Angel in his vamp face.

Angel wakes up from this apparent dream shaken. Meanwhile, Kate is investigating the crime scene, which is real, and not just from Angel's dream. She comes across the woman and tilts her face to the side, revealing a cross has been scratched into the woman's face. She announces that this was done by the same "guy" — this woman is his third victim — before speculating that he's just getting started.

The next morning, Cordelia is practicing business-related lines to an empty chair, when Wesley interrupts her. He tells Cordelia he's brought the office's mail, but Cordelia remarks that the address is wrong—the mail actually belongs to the dentist's office next door. Suddenly, Wesley sees something on the front page of the paper that catches his interest. His expression turns from one of contentment to one of concern, and he leaves when he hears Angel coming up the elevator, claiming that he needs to return the mail to its proper owner.

Angel comes into the office in a bad mood, and Cordelia suggests having Kate help them run a license plate for their runaway case. Angel is so distracted he almost walks out the front door, during the day, and announces he'll take the tunnels to get to Kate.

Kate is having her own troubles, but agrees to help Angel. While there, Angel sees the victim from his dream in one of Kate's active cases. He instantly is unnerved by the revelation that his dream is more than just a figment of his imagination. Kate reveals that the tabloids are calling the killer "The Pope", but Angel disagrees; this isn't a religious man, this is a man mocking God.

Angel leaves and Kate gives a criminal profile to a room of police officers, and her profile of the murderer known as "The Pope" resembles Angel: he sees himself as subhuman, he is a loner, and he likely doesn't remember what he has done.

Back at the Angel Investigations office, Wesley quickly runs in, asking where Angel is. Cordelia states he isn't here, noting how rude it is to bring a stake into a vampire's office. Wesley shows her the newspaper article which depicts the mutilated victim from Angel's dream. He also shows her his extensive research, specifically on Angel; the way the victim has been killed is identical to Angelus' method in the 1800's. Cordelia is extremely defensive against Wesley's accusation, and tells him that Angel isn't Angelus anymore. Angel interrupts her and admits that Wesley is right and tells them of the dreams he has been having, mentioning that he enjoys the actions during the dreams. Wesley thinks that it is possible that Angel sleepwalks before dawn, the same time the murders take place. They decide that, for the night, Angel will be tied down to his bed while Wesley makes sure that Angel doesn't escape.

As Angel sleeps, he dreams of a time in the 1800's where he is stalking a frightened girl who is trying to flee. A figure gets in front of her, cuts a cross into her cheek, then bites her, draining her blood. The next morning, Cordelia comes in and happily explains that Angel couldn't have killed the woman because there has been another murder. Both Wesley and Cordelia seem happy about this, but Angel interrupts their happy situation by insisting he is responsible.

In the office, Angel explains that he sired another vampire, Penn, and taught him to kill in the exact way these victims are being slaughtered. He says he has always had a connection to those he's sired, which explains why he sees the murders through Penn's eyes.

They realize that Kate is hunting Penn and getting too close. However, this could be good, Angel decides, as they can use Kate and her resources to track down Penn. He visits Kate and gives her a drawing of what he assumes Penn will look like now. While he is there, he sees crime scene photos from "The Pope's" murders. Angel realizes Penn has been killing people in this same way over and over, re-living murdering his family; he's killing people that remind him of his mother, brother, sister, and father. He tells her the next victim will be a white male adolescent in a low-rent neighborhood, probably by a liquor store. He steals a police radio to make sure Kate's team is safe, and so Wesley can intervene if necessary.

Penn proves Angel correct by preying on a white male teen, who is begging for alcohol "for his mother". Penn lures him in by offering to buy the alcohol he needs. The police interrupt just as Penn starts to drink the teen's blood, and he flees into a nearby warehouse window.

Angel and Wesley arrive, realizing Penn must still be in the building. Angel throws the car in reverse and stops by a drainage pipe, which he climbs into. Alone, Kate creeps into the warehouse, searching for Penn, who fearlessly comes down the stairs. She orders him not to move, but he continues, so she shoots him three times. Penn falls and Kate approaches, checking for a pulse and, of course, not finding one. Penn wakes up, says "Ouch," and throws Kate across the room. As he makes his way toward her, Angel breaks in from the higher floor and confronts Penn. While Penn and Angel catch up, Kate radios in for extra help. She watches from afar as Angel changes into his vampire face, promising to kill Penn, and the two fight. Angel orders Kate to flee to safety, although she ignores his request. Penn throws Angel into Kate and escapes, and Angel realizes that this is the first time Kate has seen him as a vampire. Kate is stunned at the sight.

Later, Kate asks Angel what he is, and he says she already knows the answer. He tells Kate that she won't stop him without decapitation, a stake, or direct sunlight. She insists he is wrong, but he argues back that she is just in denial as there are some things in this world she just doesn't want to face.

Angel leaves and Kate goes back to the station. She starts researching murder cases that match "The Pope's" profile beginning at the first records they kept.

Back at Angel Investigations, Cordelia is repeating her speech and we see she is talking to Penn, whom she thinks is a potential customer. She soon realizes that he is pumping her for information and figures out who he is. Penn tells her she'll never make it to the exit, but she opens the curtains behind her just as Angel arrives, asking her for a stake. Penn and Angel argue with one another before Cordy returns and hands Angel the weapon. Wesley walks in and Penn grabs him, shoving him to Angel as a distraction before fleeing.

Kate has taken the time to study everything she can on vampires, as well as Angelus, who she has figured must be Angel. When Angel goes to her house, she remarks that he has to be invited in, but that she certainly won't be inviting him, because she knows what type of person he was in the past. She blames him for everything Penn is doing, and tells Angel she no longer needs his help, as she now knows what to do. The next time she sees Angel, she says, she'll kill him.

Cordy finds reports from murders related to "The Pope", and, with Wesley and Angel's help, figures out where Penn is hiding; he is a rather predictable vampire and kills in the same place every time he begins this reenactment. They go to Penn's hiding spot, a hotel, and search for him, coming across the newspaper clippings Penn has kept as trophies. They come across information on a school bus and its route, but Angel realizes this is just a distraction, and runs to find Kate who is being assaulted by Penn at the police station.

Penn drags Kate into the sewer and tells her he's not going to kill her, he's going to make her wish he had by making her one of them, because then Angel will kill her. Kate throws Holy Water into Penn's face and runs away from him, as Penn tells Angel that he is correct: he has spent the past 200 years sticking it to his father, although notes Angel is his real father, as he has improved him in so many ways his mortal father never could. Angel accepts the role as father and tells Penn he's grounded. The two vampires fight, and Penn gets Angel pinned so that if Kate is going to stake him, she'll have to go through Angel. Kate, however, shoves the spear through Angel's stomach and up into Penn's heart, killing him. Angel says she missed, but Kate says she didn't. The two sit in the tunnel together in silence, their relationship permanently strained. While Kate is able to see that Angel isn't evil, she still cannot forgive him for forcing her to see the supernatural underside that lurks throughout L.A. and making her realize that the world is far more unusual and deadly than she imagined.

Later, Angel sits alone watching the city from the balcony of his apartment. Cordy tells him she has had a new vision, and Angel tells her he's wondering if the world really does change. Cordy assures him the world does change, and that he has changed. She assures him that the message she got in her vision wasn't for Angelus, it was for Angel, and that the Powers That Be know the difference.

Angel asks her what she'd do if the day ever comes that he reverts back to being Angelus. Cordelia doesn't hesitate in assuring him that she'll kill him dead, and for this he is genuinely grateful.