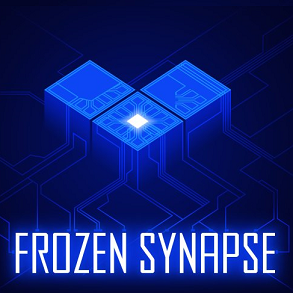 We hope you like the color blue.note if not, we have red for the DLC.
You might think I'm a crazy idealist; of course I am! Only madmen can point out the cracks that society has developed.
—Smythe
Advertisement:

So, here's the thing: there's a system called the Shape, a virtual reality that sprang from communication systems, and there's a company, Enyo: Nomad, that uses it to control everything, from the media to the economy to the government to every citizen in the city of Markov Geist.

In this dystopia, you are Tactics, a being called for help by Graham Nix, leader of Petrov's Shard and former head of Enyo:Nomad. Petrov's Shard is the Resistance group that calls for Enyo:Nomad to loosen their control of the city and the shape. They refused, and now you're leading Petrov's Shard's humans and vatforms to battle against Enyo:Nomad. The opposition you face is incredible, and will require tactical skill bordering on outright prescience for victory to be achieved, especially once you come to face the shapeform who controls the armies of Enyo: Nomad, Charon's Palm.

Or you could just forget about all the story and jump headlong into the Multiplayer mode.

Frozen Synapse is a Cyberpunk simultaneous turn-based tactics game developed by Mode 7 Games. In this game, you and your opponent control a group of soldiers wielding various weapons with the goal to wipe the other side out. Your job is to plan and simulate the movement of both your troops and enemies' troops. Be warned, though; the enemies are doing the same as well, and one mistake could lead to the death of your single-HP soldiers. Each turn, be prepared to adjust your meticulously thought-out plan.