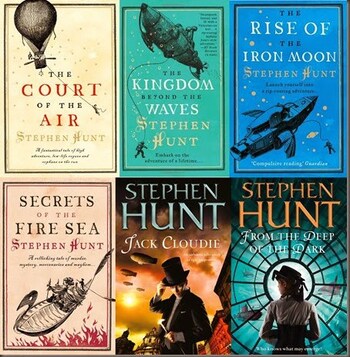 The Jackelian Series is a series of Science Fantasy novels written by English author Stephen Hunt. The series is comprised of The Court of the Air, The Kingdom Beyond the Waves, The Rise of the Iron Moon, Secrets of the Fire Sea, Jack Cloudie and From the Deep of the Dark. All the novels are set in the same universe, but with a rotating cast of characters in each book.

The novels are set in and around the Kingdom of Jackals, a steampunk Kingdom with shades of Victorian Britain and Gilded-Age America. An economic and military powerhouse, Jackals is beset on all sides by enemies within and without. To protect Jackals, the founders of the Jackelian Parliament created the Court of the Air, an elite spy organization so secret that few who hear of it actually believe it exists. Despite their best efforts, threats to Jackals and even the world loom large.