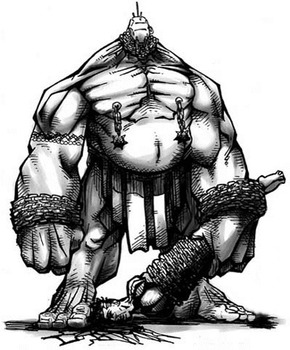 Sheesh, the dude in his hand has a bigger head than him!
"...and the hero is old hand Chris Redfield, whose tiny, dorky head on absurdly muscled body looks like someone left a Chia Pet on top of a fridge."
— Yahtzee, on his review of Resident Evil 5
Advertisement:

This is often used with large scary characters, because it makes them look that much bigger and intimidating (muscle-building works anywhere but the head, so they'll look even bigger by comparison). Another possible reason for this is that baby humans' heads are massively larger in proportion to their body than an adult's is, so our brains may be wired to percieve individuals with proportionately smaller heads as a tougher opponent.

Compare Top-Heavy Guy (big upper body, small from the waist down) and Gonk. The exact opposite is Waddling Head and Big Head Mode. Not to be confused with Shrunken Head.