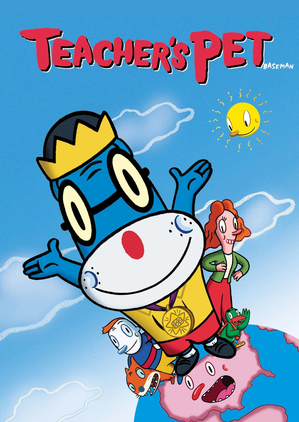 Teacher's Pet was a Disney animated television series that ran from 2000 to 2002 and concluded in 2004 with a theatrical movie. Best remembered for Nathan Lane's voice in the starring role and the distinct animation design by famed illustrator Gary Baseman

The story follows a nine year old boy named Leonard Helperman and his pet dog Spot. Spot is so interested in Leonard's life as a human that one day he follows him to school, puts on human clothes, and joins his class under the name Scott Leadready II. His disguise amazingly fools everybody, but Leonard eventually discovers the truth. While initially shocked by this, he reluctantly allows Scott to continue the charade. Scott comes up with amazing plans that sometimes inadvertently get Leonard in trouble for it. Other characters include Mrs. Helperman (who is not only Leonard's mother, but his teacher as well), Mr. Jolly (the Helpermans' sensitive cat), Pretty Boy (the Helpermans' abrasive bird), and Leonard's various classmates such as Leslie (his best friend and crush), Ian (the class weirdo) and Younghee (Leonard’s nemesis).

In the movie, when Spot finds out that a mad scientist can turn animals into human beings, he sees this as a chance to become a real boy. Joined by Leonard, Mr. Jolly, and Pretty Boy, they are off to see him. Spot becomes a man (his age in dog years), but it's not what he thought after all.

This show and film provides examples of:

Dr. Krank sings about his horrible life and how it led him into being a mad scientist.

Dr. Krank sings about his horrible life and how it led him into being a mad scientist.