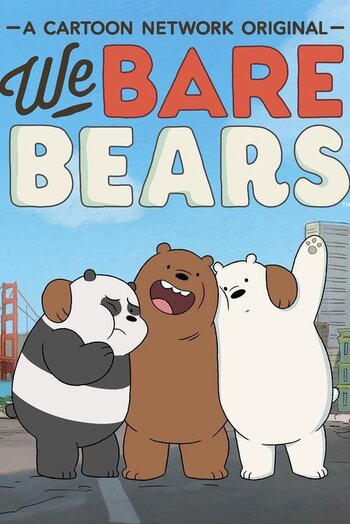 We Bare Bears is a Cartoon Network original created by former Pixar story artist Daniel Chong (Cars 2, Inside Out), adapted from Chong's webcomic

It follows the adventures of three brothers, Grizzly, Panda and Ice Bear, as they attempt to integrate themselves into the norms of human society in the San Francisco Bay Area. These brothers also happen to be a bunch of cave-dwelling, talking bears.

Occasionally the show breaks from the usual hijinks to have episodes about the trio as bear cubs, traveling the world in search of a place to call home in a format that more closely resembles the original webcomic.

The brothers have a unique mode of transport, which involves each bear stacked on top of one another like Jenga bricks, and thus the invoked meme '#bearstack' went viral.

The series premiered on July 27, 2015 and completed its fourth season on May 27, 2019. A Made-for-TV Movie entitled We Bare Bears: The Movie was released digitally on June 30, 2020, which served as the Grand Finale. A Spinoff Babies series, We Baby Bears, premiered on January 1, 2022.

, has various facts and trivia about the show. The Facebook page

is full of humor. And several staff members have their own blogs.

On August 19, 2015, a We Bare Bears mobile game titled Free Fur All was released and is available on the Apple Store

We Bare Bears contains examples of: