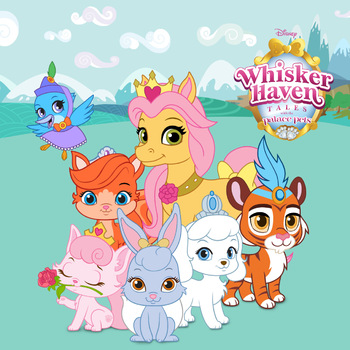 Welcome to Whisker Haven!
"At the heart of it, we strived to create a series that would be charming and humorous for both kids and adults. The adventures of Treasure, Sultan, Dreamy, Pumpkin, Berry, Petite and all their friends are very near and dear to our hearts. It was a great step for Ghostbot to move towards episodic content and show that we could draw in an audience with our quality of work across a longer span."
— Alan Lau (supervising director)
Advertisement:

Whisker Haven Tales with the Palace Pets (also simply known as Whisker Haven Tales) is an American children's series of short segments produced by Ghostbot and Disney Digital Network. The shorts premiered on Disney Junior on June 20, 2015, and ran for 3 seasons.

The shorts follow the various Slice of Life adventures of the Palace Pets (Treasure, Sultan, Dreamy, Pumpkin, Berry, and Petite), who are a group of pets that live with Disney princesses. They travel to a magical world called Whisker Haven, which is gatekept by a magical hummingbird fairy Ms. Featherbon.

The show is based on the 2013 Palace Pets franchise, which is a Spin-Off of the Disney Princess franchise.