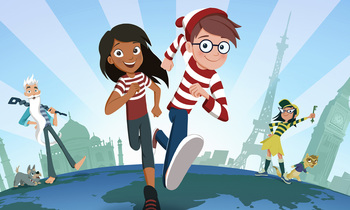 Ready, Set, Wander!note Left to right: Arf (dog),Wizard Whitebeard, Wenda, Waldo, Odlulu and Fritz (ferret).
Take a trip all around the world,
Catch a ride to the moon! (Yodel-ya, yodel-ya!)
Ride the wave at the beach,
Jump in, discover something new!
Oh-eh-oh!
Anywhere you go, I'll find you.
Oh-oh-oh!
Where do you go? (x2)
Where's Waldo?!
— Excerpt from the Theme Song.
Advertisement:

The series introduces the WorldWide Wanderer Society, an international organization comprising of magical travelers. A younger Waldo (voiced by Joshua Rush) is a Wanderer-in-training under the tutelage of the eccentric mentor Wizard Whitebeard. Working closely with his junior-level partner Wenda (voiced by Haley Tju ), the two inquisitive kids solve various missions across the world, in an effort to earn their Wanderer stripes and gathering Magic Keys in the process.

Originally slated for May 23, the series made its formal debut on July 20, 2019 on Universal Kids. Prior to that, the pilot episode ("Costa Rica...In Color!") aired as a sneak peek showing on July 6th on the channel, free to view online on the channel's website

. The series is planned to last for at least 40 episodes

Not to be confused with the similarly named older adaptation Where’s Waldo?: The Animated Series.