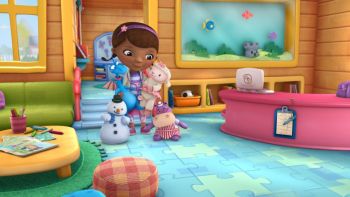 The Doc is in!

Doc McStuffins is a preschool-targeted CGI-animated children's series on Disney Junior featuring a child doctor who runs a clinic for stuffed animals and toys. The series was one of the first announced for Disney Junior, which replaced Playhouse Disney, though it did not begin airing until Valentine's Day, 2012 with the premiere of the 24/7 Disney Junior network in the United States.

In each episode, the eponymous Doc uses her magic stethoscope to bring toys to life and then diagnoses and heals a sick or damaged toy. With its complex characters and willingness to buck the general format of similar shows currently on the air, the program has been described

as "Cheers for prechoolers" and has amassed a sizeable audience.

The second season started in mid-2013, and ended on Spring 2015. The third season started on Summer 2015, and ended on Spring 2016. The fourth season premieres officially on July 30, 2016, though the premiere has already been made available through Disney Junior's online/mobile service. The new season introduces a new concept to the show: McStuffinsville and a toy hospital in which Doc can help out not just the toys from her neighborhood, but toys from all around the world. Thanks to a celebrity campaign

the series has been green-lit for a fifth season. The show is created by Chris Nee, and is the second Disney show to be created by a woman. As of September 2017, it has the distinction of being the longest running Disney Junior show in terms of total episodes since the network changed to that name from Playhouse Disney.

of the last season has been recorded, ending the show after five seasons. The show ended on April 18, 2020.

Now with a brand new recap page. Give it a cuddle.