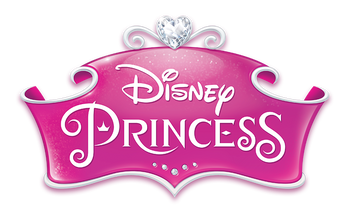 Moana: I'm not a "princess", I'm the daughter of a chief!
Maui: If you wear a dress and have an animal sidekick, you're a princess.
— Moana
Advertisement:

Disney Princess is a franchise incorporating select female characters from the Disney Animated Canon, most of whom actually are princesses (by birth or marriage).

Disney officially applies this title to (in order of their film releases):

Disney has included others in the merchandise at times, such as Alice of Alice in Wonderland and Giselle of Enchanted, but they have never officially been added to the roster. note In Enchanted's case, this is because Disney would have to pay Amy Adams royalties to use her image so they decided against it. Esmeralda of The Hunchback of Notre Dame was an actual Princess until 2004. Anna and Elsa from Frozen were expected to be the 12th and 13th to join the line-up, but Disney ended up retaining the Frozen brand as an adjacent but separate entity from the Disney Princess franchise, although Anna and Elsa are sometimes included with the other princesses in some media, most famously in an extended cameo in Ralph Breaks the Internet. Kilala Reno and Princesses Sofia and Elena are also excluded, though characters from the Disney princess line regularly feature in Sofia's own show. Raya is also excluded, though acknowledged as an honorary member. note And of course, there are the various examples of Disney princesses not affiliated in any way with major merchandise, that is, Kida and Eilonwy. After Disney acquired Star Wars, there have been a few half-joking suggestions about Leia being added; Disney's acquisition of 20th Century Fox caused Anastasia to be mooted similarly.

They were just a bunch of characters, but when Disney realized how popular they were with young girls (because of the so-called Princess Phase), they produced a toy line of them in a similar manner to Barbie. This includes not just dolls but in fact a whole variety of merchandise. The line also makes role models out of the princesses, often teaching the values of honesty, kindness, and recycling in their Direct to Video shorts and films.

Beyond their respective films and the Disney Princess

line, they appear in a wide variety of other Disney-created media:

Compare Disney Fairies (a franchise that lasted from 2005 to 2015, focusing on Tinker Bell and her fellow fairies in Pixie Hollow) and Frozen (the popularity of Anna and Elsa was enough for the film to become its own viable franchise separate from the Disney Princesses).

This product line provides examples of: