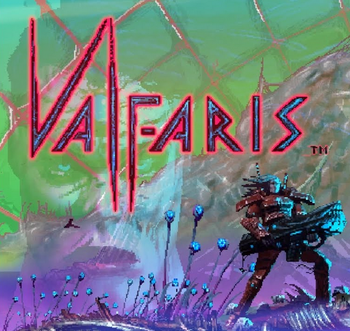 Valfaris is a brutal action platformer, developed by Steel Mantis and released on October 10th, 2019 for PC, PS4, Xbox One and Nintendo Switch. Like the creator's previous work, Slain, it is brutally difficult and with aesthetics clearly inspired by Heavy Metal, though with a sci-fi setting rather than fantasy.

The game is named after the planet-sized citadel of Valfaris, once a shining jewel in the crown of Emperor Vroll, but which had mysteriously disappeared from all charts long ago, and the Emperor went missing with it. Now, however, it had re-emerged around the orbit of Sol Mori, a slowly dying purple star.

Vroll's son, Prince Therion, was once born on Valfaris, but ever since it was gone, he had long dreamed of hunting down Vroll for his crimes. Now that Valfaris is back, and represents his best chance of finding Vroll, he flies there without a second thought, even if he only has his sword, pistol and Hekate - his wolfship's AI - to assist him.