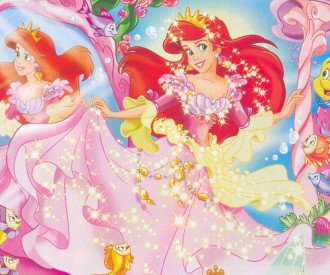 How can a fancy dress work underwater?
Um... well...
It's pretty! That's how!
Advertisement:

The limit of the Willing Suspension of Disbelief for a given element is directly proportional to how pretty or stylish it is.

Want a castle made of solid pink diamond for your webcomic? Who cares about the cost, or if it's even possible to make that kind of structure. It looks pretty. Or more realistically, the royal crowns and capes. They are expensive and heavy, but they give the impression of majesty. As long as it looks good, the practicalities don't matter.

Works made for young girls can be very prone to this (as seen in the page picture), but it also occurs in works for boys, just that the form is different.

But for this rule, not only does something have to be sufficiently glamorous to work, the viewers actually have to want to watch such things. If not, even realistic examples of such elements can turn them off. So this is an audience specific rule.

Note that tropes that are about glamour but are perfectly reasonable are already listed on The Beautiful Tropes.

Works that make heavy use of this rule: