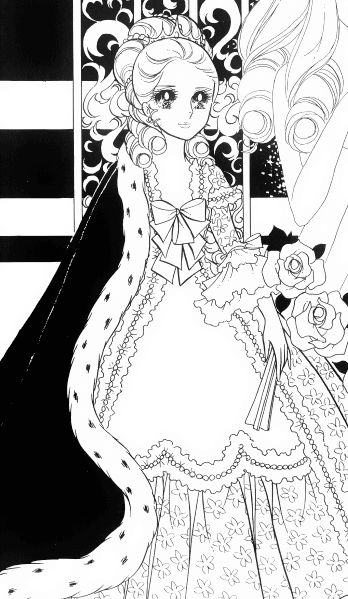 Her dress, tiara, and ermine cape let us know she's a princess, not a construction worker.note Though she could work construction on the side.
Advertisement:

Despite what some would like to believe, there is no inherent majesty in royalty that radiates off them, save for certain Speculative Fiction stories. This is why they use special accessories to make their station clear to everyone looking at them. Since this is done in Real Life, why should fiction be any different?

As for fiction, The Law of Conservation of Detail means one of these can't show up unless it has something to do with royalty, however tenuous. The wearer could be actual royalty, or it could be a contest where the winner is given a crown and/or cape, hence being given a sort of recognition as royalty. (Or, of course, in a culture where the monarch selects the heir, it can be both.)

Of course in fiction, the Ermine Cape Effect is often applied, so royalty tends to wear one or more of these constantly, unless they are Modest Royalty.

In European royalty, the most common ways to identify royalty are:

Nobles can also make use of regalia when they are working directly for the king, or when there is no monarch, to indicate the chief of a council of nobles. They wear special stripy mantles of their own, dependent on rank, and even have a coronet (a small crown with no arches) for very special occasions. Other times there is a Dress Code dictating what regalia the royals and the nobles wear.

Also, in some fiction, these tend to have magical properties related to royalty. Even if not, these will rarely be as heavy, delicate, or cumbersome in fiction as they are in real life, unless it's explicitly mentioned as a Take That! to royal life.

A Super-Trope to Ermine Cape Effect (in that the regalia is worn no matter the situation).

N.B. If a character simply wears one of these, it's probably best to just list that in Ermine Cape Effect. This works better if reserved for instances that we can state how they actually stand out in some way.