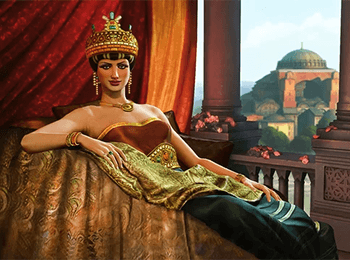 A Stock Pose across many forms of media. The best way to show that the ruler of a country is powerful, decadent, hedonistic, and/or comfortable within their power is to show them reclining on their throne or another lavish piece of furniture.

For kings, sultans, emperors and other rulers, they're often portrayed as being surrounded by servants while being fed grapes or cooled by giant fans, all the while with a very troubled/bored expression. For women, this tends to get taken Up to Eleven, usually with the female reclining on something like a sofa, futon, or bed while wearing next to nothing.

Some rulers will even travel on a litter so that they can continue this look when on the move.

Although not exclusive to villains, they are the most common form of the trope, since Evil Is Cool and Evil Is Sexy.

Often used as a Modeling Pose if the product modeled is meant to make the customer feel regal.

Sister Trope to Slouch of Villainy and Super-Trope of Grapes of Luxury.

Compare Idle Rich. Not to be confused with Reluctant Ruler. Some ladies may even wear Diamonds in the Buff while taking this pose.