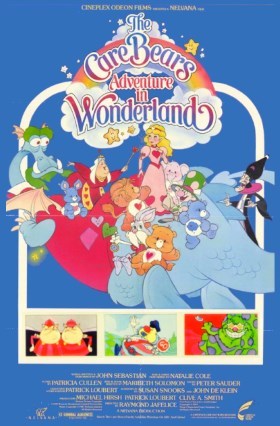 The Care Bears: Adventure in Wonderland (1987) is the third and final theatrical film in the Care Bears franchise.

Unfortunately, the wizard is on to this scheme, and hopes to expose Alice for what she is. It's up to Alice to prove her worth, and the Care Bears to find the real princess in time.

The plot basically has more in common with The Prisoner of Zenda than Alice in Wonderland.

The box office for this film was the lowest of the three, causing a fourth film, Care Bears Nutcracker Suite, to be a TV movie. There would be no further movies until Direct to Video films in the Turn of the Millennium. It was distributed by the film distribution subsidiary of a Canadian movie theatre company, Cineplex Odeon (now known as Cineplex Entertainment

This film also marked the last time the Care Bear Cousins (mainly Swift Heart Rabbit and Brave Heart Lion) played a major role in the Care Bears franchise, before getting shelved in 1994. The Cousins wouldn't get a major role with the franchise until the premiere of Care Bears & Cousins on Netflix (the Sequel Series of Care Bears Welcome To Care Alot) note  The botched attempt by Play Along between 2003-2005 doesn't count).

The Care Bears: Adventure in Wonderland provides examples of the following tropes: