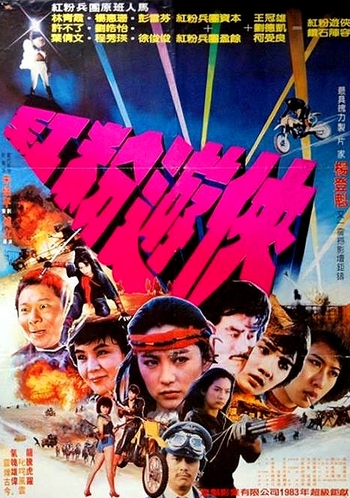 As Pink as the Movie's logo...note by the way, anyone saw that machine-gun arm attached to Brigitte Lin's right wrist, at the bottom right?
"It's an omen! The dying man will see the Heartbroken Man!"
Advertisement:

Set in an unspecified era where Nazis exist alongside samurais, ninjas, rejects from Mad Max, and the Ku Klux Klan, the titular commando team is an all-woman fighting force led by Jackal (Brigitte), who got their hands on a cache of stolen gold but is being pursued by the Nazi army. After a brutal Action Prologue which leaves most of her team dead, Jackal orders her team to leave, allowing herself to be captured by the Nazis led by their commander, simply called the "Pig Commander"... only to reveal that she's actually working in cahoots with him, for they are secretly lovers.

After a Time Skip, Jackal ends up being betrayed by the Pig Commander, and have to seek her former friends where she needs to prove her allegiance by cutting off her arm (not making this up) before they ends up as a team again, to recover a gigantic diamond from a bandit gang for a La Résistance army. But when the diamond turns out to be a dud, a confrontation results in Jackal getting dropped into a river, where she is rescued by a mysterious, nameless stranger called The Heartbroken Man (not making this up), who then makes a robot arm for Jackal for self-defense. Now returning as a badass killing machine, with her robot arm upgraded to a Gatling Gun (not making this up), Jackal must rescue her friends and join a La Résistance band of soldiers to fight off the Pig Commander, who had allied himself with the aforementioned bandits, ninjas, and every fictional evil army in an epic final battle. The plot kinda just forgot about itself for the sake of the 15-minute long war sequence.

This film, together with Fantasy Mission Force and Golden Queens Commando, would form a Thematic Series of sorts, being a trilogy of schlocky war-action films sharing the same director and with Brigitte Lin as a key player.