Excuse Me While I Multitask 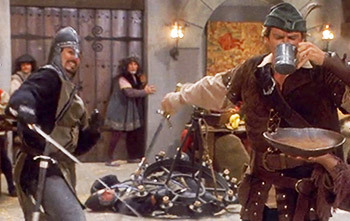 Two guys are fighting. One of them decides to show his superior fighting skill by:

May coincide with Multi-Armed Multitasking or Master of the Levitating Blades, if the character would be capable of wielding many weapons at once. Sub-Trope of Just Toying with Them. Super-Trope to Combat Uninterruptus. Compare With My Hands Tied, Ignored Enemy, Badass Back, This Is No Time for Knitting, Epic Battle Boredom, The Snack Is More Interesting, Kinda Busy Here.

Can overlap with Flynning or even Coitus Uninterruptus. May involve Nonchalant Dodging. Can also be a relative of Offhand Backhand.

During his Manic Episodes, Kahn has a lot of life in him.

During his Manic Episodes, Kahn has a lot of life in him.