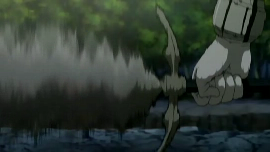 Death of a Thousand Cuts, packed a dozen per millisecond.FYI That's death in 83.333333333333333333 miliseconds.
His right arm transformed into a sword whose sonic vibrations caused orgasms throughout Neo-Tokyo.
— Plan 7 of 9 from Outer Space
Advertisement:

A futuristic bladed weapon that has Absurd Cutting Power because it vibrates. The idea is that high-frequency vibrations in the blade allow the weapon to cut through nearly anything, essentially making it an extreme version of an electric turkey carver. Often, this results in a humming noise and the blade of the weapon visibly blurring or even glowing.

Bonus points if it cleans itself — rather explosively. Potentially has great Mundane Utility: it is the descendant of real tools very closely related to the fast cleaner/washer/perfect blender. These weapons may be as dangerous to the user as the enemy. Often, the only thing that can stop a vibroweapon is another vibroweapon, although that doesn't follow if you think about it.

A variant of this is blunt weapons (sometimes even the person's own body) that are charged with high-frequency vibrations; in this case, it's used to deliver higher striking power, as well as giving the target a violent dose of vibrations, which can bypass defenses.

Compare Hot Blade and Laser Blade, which use heat or light energy instead of vibrations to cut better than a mundane sword. A subtrope of Absurd Cutting Power. For lower-tech cutting weapons with moving parts, see Chainsaw Good. For another weapon that uses vibrations, see Sonic Stunner.