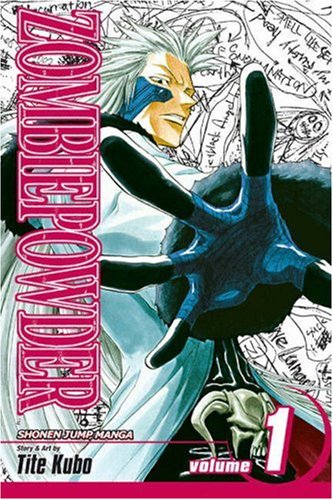 Earlier work of Tite Kubo (author of Bleach) set in a somewhat familiar but distinctive, Wild West-tinted world. Guns, gangs, swords, weird arts on border of magic - everything is used by various hunters to collect twelve Rings of Dead. Zombie Powder, a powerful substance produced by the rings, has a power to bring the dead back to life and make the living immortal. No wonder that so many want to get it and among them the hero of the story Akutabi Gamma, his mysterious partner C.T. Smith, paparazzi of justice Wolfgangina and sidekick John Elwood Shepherd, each for their own purpose.
Advertisement:

Sadly, the manga only ran from 1999 to 2000 and was canceled after its fourth volume, leaving many mysteries unsolved. Since Kubo has gone on record saying that he wrote Zombiepowder. during a bad chapter of his life, it will probably never be revisited.