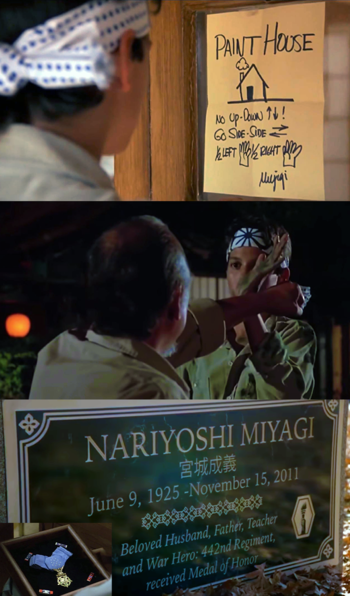 Mr. Miyagi's family died at an interment camp while he fought in WWII, now he teaches karate through menial tasks. It's very effective, though.
"Endure. In enduring, grow strong."
— Dak'kon, Planescape: Torment
Advertisement:

A character who has been through utter hell, and came out sad, cynical, and Wise Beyond Their Years. Part of their wisdom is knowing that it is wasted on most people, so they don't go around babbling it to everybody. Instead, they wait until they see somebody who is worthy, and serve as the worthy one's Mentor.

Like an ancient Zen master, a Zen Survivor never gives straight advice. Instead they speak in odd riddles and hints, delighting in Cryptic Conversation. They also make bizarre demands, and do cruel, seemingly pointless things to their student. This is because (also like a Zen master) they have an Omniscient Morality License. They know not just the world but their student better than the student does — each of their cruel tests is designed to teach a lesson, and the lesson is always right.

Usually, the Zen Survivor does this because simply giving advice doesn't convince anybody, whereas odd tests do. If their student is too stubborn to believe them, the Zen Survivor will pretend to give in... and provide just enough rope for the student to hang themselves. Inevitably, the student will come crawling back.

Distinct from the All-Powerful Bystander in that they hold back knowledge, not talents or powers.

The Zen Survivor can also be evil and generally realize it themselves, but they justify their actions on the basis of ruthless pragmatism (often in the name of the greater good).