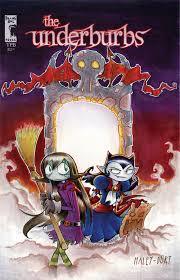 The Underburbs is an indie comic book series created by Joe Haley and T.J. Dort, started in 2005, and continuing to this day. It centers around "Countess" Winifred Pale, a vampire bent on taking over the world with a scroll that turns people into monsters. Unfortunately, due to incompetent subordinates and general lack of knowledge about our world, she has yet to succeed. Angela, a human-turned-witch from our world, serves as her Sidekick and viewpoint character.

Nineteen issues have been released so far. Issues 1-3 were reprinted as a Trade Paperback with added material. It does not have national distribution, so ways to buy the comic are limited to some Massachusetts comics shops, via www.indyplanet.com or by ordering them from the creators themselves at the_underburbs@yahoo.com.

In addition to the comic series, Joe Haley (also known as "Mr-DNA") manages a "Chain Story" non-canon spin-off entitled Angela's Magic Lesson, in which readers can commission new branching paths and epilogues that result from Angela casting magic on herself.