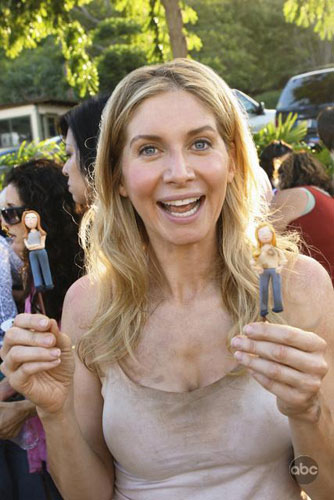 Elizabeth Mitchell is overjoyed by cake.
Elizabeth Mitchell (born Elizabeth Joanna Robertson, March 27, 1970 in Los Angeles, California), is an American actress. She's a professional That Girl with a highly prolific filmography, but is perhaps best known for her role as Ensemble Dark Horse Juliet Burke in Lost and Angelina Jolie's lover in Gia. She was also the lead on V (2009), and starred on the post-apocalyptic show Revolution. In 2014 she appeared as the Snow Queen on the hit series Once Upon a Time.
Advertisement:

Elizabeth has gained critical acclaim for her versatile performances in a wide variety of different roles, playing anything from sadistic paedophiles to fierce action girls to psychologically complex piano teachers and everything in-between.