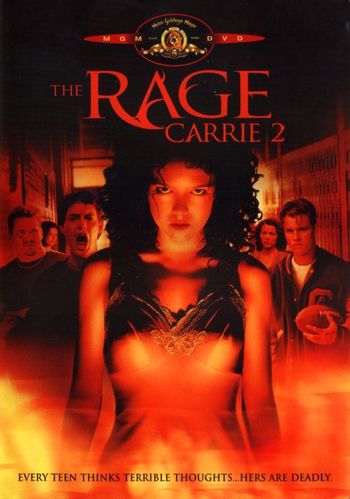 Every teen thinks terrible thoughts. Hers are deadly.
Advertisement:

The Rage: Carrie 2 is a 1999 horror film and a direct sequel to Carrie (1976), starring Emily Bergl, Jason London, Mena Suvari, and Amy Irving.

Teen outcast Rachel Lang sees her best friend Lisa kill herself after a Jerk Jock has sex with her in order to score points in a "game" he's playing with the rest of the team (based on a real event, unfortunately). Rachel seeks revenge against the football players that caused her friend's suicide, and along the way, learns that she possesses psychic powers. She develops a crush on Jesse, one of the wiser football players, and the two enter a relationship — much to the ire of Jesse's teammates, who start plotting against Rachel. Meanwhile, school guidance counselor Sue Snell — a survivor from the original film — finds out about Rachel's powers and steps in to help her, fearing a repeat of what happened with Carrie. Everything comes to a head at the after-party for a football game, where the jocks play a tape of Rachel and Jesse having sex.

Needless to say, that party does not end well.

The Rage was part of the post-Scream (1996) wave of hip, post-modern teen horror films, and it was originally planned as a standalone film titled The Curse.