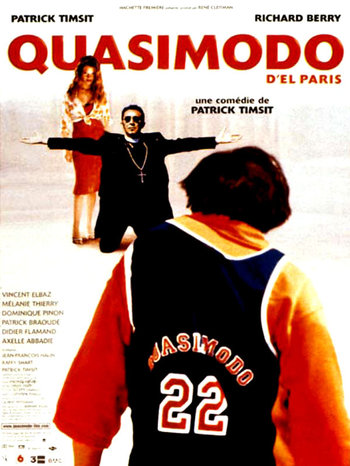 Quasimodo d'El Paris is a 1999 French comedy film directed by and starring Patrick Timsit. It is inspired by Victor Hugo's The Hunchback of Notre Dame, and updates the setting to the late 1990s.

In the (fictional) modern-day city of El Paris, Quasimodo is the young son of the local governor. He gets targeted by a curse thrown by a shady man known as Trouillefou, and he ends up physically abused by his father, so much so that he becomes a deformed hunchback. Quasimodo is then abandoned by his parents, who adopt a beautiful little girl named Esmeralda to replace him, and grows up at the city's cathedral where he rings the bells, under the watch of the priest named Frollo. Fast forward twenty years, in Quasimodo's adulthood, a Serial Killer starts targeting the women of El Paris, and due to his formidable strength, Quasimodo ends up a prime suspect...