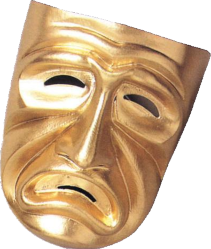 In a sentence, you could say that Tragedy concerns itself with the fall of a protagonist due to their own mistakes and/or flaws.

As a genre, tragedy is Older Than Feudalism. It has changed quite a bit since its conception in ancient Greece, and nowadays is a dying genre... how tragic! Soon it will be just as dead as Irony.

As you can guess from the above facetiousness, Tragedy is also as clingy as Irony and as difficult to define and apply. It's not enough to be on the deeply cynical end and have a Twist or Downer Ending with plenty of Drama and artsy angst along the way, or have the hero's happy home life destroyed with a girlfriend raped and a dead little sister; it has to be of an epic scope with inexorable and self-inflicted pain brought about for past sins. And, despite all that, it also has to give the viewer closure.

This last one is perhaps the hardest to capture correctly. After all is said and done, the audience should not feel impotent rage, denial, confusion, or having been cheated. They should feel that the ending is a natural outcome to the hero's actions, and that in having faced punishment for those actions they [the audience] are purged of anxiety and worry. The world does make sense, the guilty are punished.

Aristotle's guidelines form the basis of Tragedy, as outlined in Poetics; here they are much abbreviated:

To borrow a simplifying example from Educating Rita, Macbeth is generally considered a tragedy in literary terms because, throughout the play, Macbeth is warned time and time again by numerous parties (including the universe itself) that his actions will bring nothing but doom and misery upon himself and his family. However, because he is blinded by his own greed and ambition, he ignores these warnings and proceeds regardless until it is much too late to avoid catastrophe. In other words, Macbeth's terrible fate could have been avoided but is ultimately inevitable because his own character flaws have made it so. On the other hand, a man who suddenly and unexpectedly gets hit and killed by a falling tree while going about his daily business isn't usually considered a tragedy in the literary sense (although his loved ones will likely find it a tragedy in a personal sense), because the man's fate isn't preordained or a result of his own character flaws; if he'd known that being at that precise spot at that precise moment in advance would have killed him, he'd have likely chosen to take a different route. In the first example, the main character cannot escape his fate due to the circumstances he exists in and his own flaws, while, in the second, the main character's fate would have been entirely avoidable and likely avoided had he known about it in advance.

On the other hand, "tragedy" in Greek times did not need to be soul-crushingly pessimistic and have a Downer Ending; Aristotle thought the best tragic plot had The Reveal in time for him to refrain and therefore not have the downfall. In fact, the opposite of a tragedy originally was not a comedy, but rather an epic. Whereas an epic typically unfolds and "opens up" to a world of unknown horrors and delights for the hero to explore, a tragedy "closes down" on the hero, prohibiting him from anything else he may think to try until at the climax of the story he is forced into one all-important decision on which everything good or bad that may follow ultimately hinges. The story of Oedipus is a tragedy in this sense not because its ending is so horrible, but because every hope Oedipus had for escaping his cruel fate was ultimately thwarted, and because everything ultimately hinges on what he decides to do when the Awful Truth is finally made known to him. Other tragedies from the time might present a better decision to the hero, and might end well if he chooses wisely. Eventually, however, the meaning of the term shifted; such a potentially Happy Ending precludes a work's being a tragedy nowadays.

To subvert a tragedy is complex. It's not enough to try for the spectacle of a gruesome Grand Guignol and stuff it up with Satire and dead babies, tack on a happy ending, or pull on heartstrings with dead babies. To subvert tragedy for real, you have to get into the cycle of catharsis and break one of the literary elements of greatness, hubris, downfall, or change, which is easier said than done; even the great Arthur Miller couldn't really do it (by his own admission, Death of a Salesman, while excellent, nonetheless failed in subverting the greatness element of the tragic form). Or, just make it a Comedy, which is basically the whole thing Played for Laughs. Though that's not really a subversion, just an interesting detail about comedy.

Greek tragedy in general is the Trope Namer for Deus ex Machina.

When adding examples, please remember that just because a work is dark and "tragic", it is not necessarily a tragedy. Tragedies need to be about a character being destroyed by their own character flaws and mistakes.