Theatre / The Tragedy of Mariam 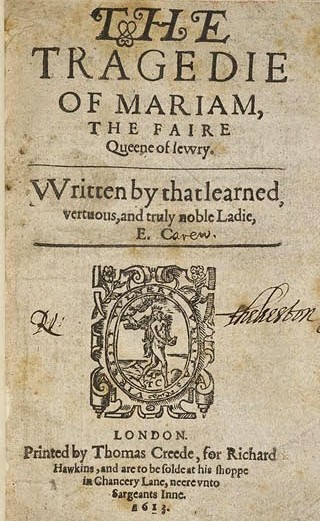 The original title page.
'Tis not enough for one that is a wife
To keep her spotless from an act of ill,
But from suspicion she should free her life,
And bare herself of power as well as will.
— 3 Chorus
Advertisement:

The Tragedy of Mariam (or, The Tragedie of Mariam, the Faire Queene of Jewry) is a 1613 play written by the noblewoman and poet Elizabeth Cary. It is known as the first extant English play by a female author.

The story is centered on Mariam, the second wife of the Biblical King Herod, and her immediate family. It begins during a period when Herod has traveled to Rome to appear before the new emperor Octavian, who, it is rumored, has had him executed. Mariam finds herself torn by this news: her alliance with Herod was political, and he arranged the murder of her brother and grandfather to secure his own rule—moreover, it turns out that he has selfishly left orders for Mariam to be killed should he himself die—yet she cannot keep herself from grieving.

The first three acts explore hers and various other characters' reactions to Herod's supposed death—before he unexpectedly returns alive in the fourth act, to discover Mariam still alive and having developed a new will to resist him. Complicating matters are Herod's vengeful former wife Doris, whom he forsook for Mariam, and Herod's sister Salome,note No, not that Salome. whose long-standing conflict with Mariam and her mother threatens to come to a head with tragic consequences.

Cary largely based the plot on historical accounts by the Roman-Jewish writer Josephus, using the previously unexplored perspective of Mariam to tackle such themes as marriage, duty, familial lineage, and women's rights. Unlike many other well-known plays of the time, The Tragedy of Mariam is a closet drama—a play written to be read rather than performed. However, it has recently been 'rediscovered' as a performance piece and has been staged by various companies and festivals.

Since this play is over four hundred years old and is available in the public domain, all spoilers will be unmarked.

Tropes appearing in the play: