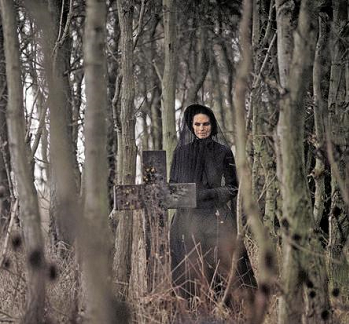 "The Bird don’t like us talking about Victor. It’s why she wears black all the time, you know."
— Enoch about Miss Peregrine and Victor, Miss Peregrine's Home for Peculiar Children
Advertisement:

Using black clothing to demonstrate mourning a person who has died. Not only at the funeral service, but also any time she is visiting their grave, a woman in mourning is shown wearing a black dress and/or a black hat with a veil. Usually, this is the widow of the deceased, but it can be other close female relatives as well, such as their mother, sister, or daughter. Spear Counterpart is a man wearing a black armband to show mourning since men wear black suits in other contexts as well.

According to That Other Wiki, black clothing and veils were colloquially called "widow's weeds" during the Victorian era, from the Old English word "waed," meaning "garment."

Not to be confused with Black Widow, or with a widow cleaning her husband's grave of weeds. Or a widow carrying THOSE kind of weeds (or growing them). Its sole purpose is to communicate nonverbally that someone has died.

This trope is typical of Western cultures, espcially among Christians and Jews. In Eastern cultures, the traditional color of mourning and death is white, in which case see Ethereal White Dress.