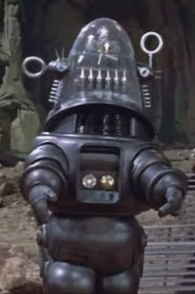 There was a time when this sort of thing was taken seriously.
"In comes a Price Club-sized tin can with Slinky arms and legs, looking like the grandfather of Pimpbot 5000, buzzing with a menace that suggests he flunked Asimov 101."
— Jim Wright's Star Trek: Voyager review of "Night"
Advertisement:

The opposite of those human-looking robots such as the Robot Girl. This is a robot designed with function over form in mind — or at least, designed to look like it is.

Though most historical examples are technically humanoid in form,note remember: CG was a new thing back then, and puppets are expensive, so you gotta be able to get a costumed actor to play these machines they still generally look like a trashcan or boiler with arms, legsnote if it even gets those and a head — either distinct or fused to their torso — pasted onto it. This robot is usually not painted and it's often possible to easily see screw heads holding it together. Bonus points if the robot's arms are made of flexi-tube with pincers at the end.

Nowadays usually done to make the 'bot look amateur-made or old-fashioned, as the unwieldiness such machines (especially those played by costumed actors) displayed on-screen almost completely discredited this trope to modern audiences. However, in older Zeerust, it was often played straight.

Compare Used Future, Real Robot. Compare and contrast with Starfish Robots. See also Forgot He Was a Robot for when this robot starts acting like a Ridiculously Human Robot.