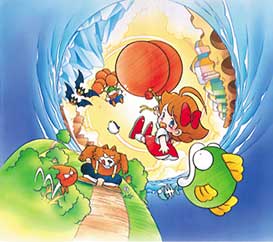 Originally released in 1990 for the Game Boy, Balloon Kid is a sequel to the NES classic Balloon Fight. The player controls a girl named Alice whose goal is to rescue her little brother, who floated away after attaching too many balloons to himself. With two balloons of her own to represent her Hit Points, Alice floats through several stages that scroll from right to left, collecting balloons and avoiding spikes, birds and other enemies.
Advertisement:

There also exist a Family Computer port called Hello Kitty World that replaces all the sprites with those of Sanrio's characters.