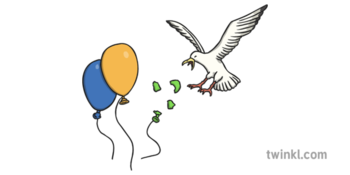 You've got a big balloon. The balloon is so big that you're actually floating up into the air. But what's this? A bird is approaching your balloon and you suddenly realize how sharp the beak is... POP!!!
Advertisement:

If you have a party balloon or some other inflatable (inner tube, hot air balloon, weather balloon, etc), it always seems that there's a bird around to break it. Usually Played for Laughs, especially in cartoons — yet if you're floating high up in the air....

Could overlap with Bubble Gum Popping, if bubble gum is involved. See also Bird-Poop Gag, for which birds use other ways to ruin the characters as gags.