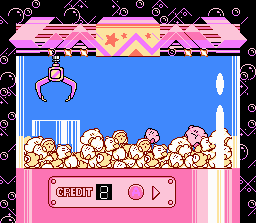 Saving Dream Land can wait until I get that plushie!
A Mini Game is just that: a miniature game.
Advertisement:

More specifically, it's a specific type of highly temporary Unexpected Gameplay Change in a video game, in order to break up the tedium of doing exactly the same thing over and over - as a result, they hardly ever Genre Shift to anything even faintly close to the original game's genre. They're one of the oldest video game tropes, and one of the most persistent.

Mini Games vary so widely that it's difficult to summarise them all, but they ultimately divide into two categories - mandatory and not mandatory. A mandatory Mini Game is one you have to succeed at just to continue the game (such as hacking in System Shock and BioShock); a non-mandatory Mini Game is one which is optional (such as Triple Triad in Final Fantasy VIII). Occasionally a Mini Game might be so optional it isn't even accessed via the story, and has to be accessed via the main menu. Completing a Mini Game can give the player rewards in the main game, or be required for 100% Completion. If the Mini Game is luck-based, and needs to be beaten in order to continue the game, it's time to grind up some money, tape down the controller and go and do something else for a few days.

Good Mini Games can be an excellent and fun way to reinject life into an otherwise repetitive game, and a good way of stretching the gamer's skills by forcing them to do something a bit different. Similarly, there's a shock value in springing a Mini Game on a player unexpectedly, which can add drama (such as Metal Gear Solid 3, which sprung a Mini Game on the player as a nightmare).

Minigame Games are games that have nothing but minigames, such as WarioWare, Cooking Mama, Bishi Bashi and the Ape Academy series. You might not get the same mileage out of a Mini Game package as you would from a hundred-hour RPG, but that doesn't mean they're not fun.

Occasionally there is the slightly disturbing situation of the Mini Game being more fun and exciting than the real game. There are games with many minigames included in a Minigame Zone.

Game Within a Game is a subtrope in which Mini Game is a in-Verse game playable by Player Character. Video Mode is a common type of Mini Game for Physical Pinball Tables. Not to be confused with Gaiden Game.

Fun fact: Namco Bandai actually held a U.S. patent on using this trope in a Loading Screen, which explains why their games usually feature fully-realized minigames that resemble some of their classic hits. Said patent expired in 2015.