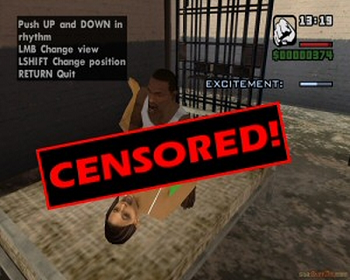 A lot of video games involve characters. Sometimes those characters get it on. Of course, since this is a video game, it's only a couple more steps of logic to present those, err, activities as part of gameplay. The result is this trope, so named after the Unusual Euphemism used in Grand Theft Auto: San Andreas. (See below for more details on its amusing history.)

Please note that this trope does not concern the general depiction of sex in a video game, or where the sex is merely an option a la Optional Sexual Encounter. (Though the two often overlap.) This trope concerns when said encounter is interactive. If the player doesn't have some control over what happens, it doesn't count. This means games like The Sims are right out, since you can tell your characters to "Woohoo," but the act itself is a Cut Scene with no interactivity, Game Mods notwithstanding.

This trope often crosses over with Optional Sexual Encounter, since (most) games do not make sex mandatory. Often overlaps with Ikea Erotica ("press B to blow!").