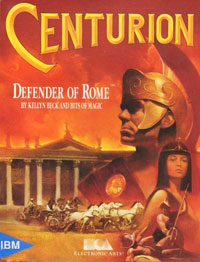 I came I saw I conquered
Beware the Ides of March
Advertisement:

Centurion: Defender of Rome is a Turn-Based Strategy video game with real-time battle sequences, designed by Kellyn Beck and Bits of Magic and published by Electronic Arts. Originally released on the DOS platform for the PC in 1990, the game was later ported to the Amiga and the Sega Genesis in 1991. Centurion shares much of the concept and feel with Beck's earlier game Defender of the Crown (1987) and might be regarded as its Spiritual Successor. In turn, the Total War Series borrows a lot of concepts from both games.

The game begins in Ancient Rome in the year 275 BC, placing the player in the sandals of a centurion in the Roman army, at first leading a single legion. The player's ultimate goal is to become a Caesar through a mix of successful military conquests and internal politics of Bread and Circuses.

The bulk of the game involves turn-based strategic planning and management on the world map and the real-time battles (with on-demand pauses to give orders to formations - i.e. Real-Time with Pause) against various enemies of the Roman Empire, such as the Celts, Carthaginians and Parthians. Centurion also features other "side-show" activities, such as gladiatorial combat (the player's duties involve financing the ludi events), chariot racing in the Circus Maximus, and naval battles. There is also some diplomacy (it is even possible to seduce the queen Cleopatra after forming an alliance with Egypt).

to some Abandonware pages that may harbor the game.

Tropes used in Centurion: Defender of Rome include: