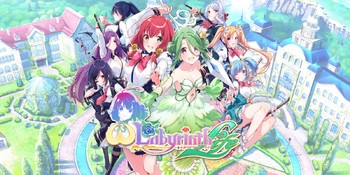 The lovely ladies of Belles Fleurs Academy, plus Flora the Holy Blossom
Omega Labyrinth Life is a 3D Dungeon Crawling Roguelike JRPG, developed by Matrix Corporation, and published by D3 Publisher Inc. It was released on digital platforms on August 1, 2019, for Nintendo Switch, and a heavily-censored version for PS4, called "Labyrinth Life" instead. Later, the Nintendo Switch version was ported onto PC via Steam, released on December 10, 2019.
Advertisement:

Belles Fleurs Academy. Beautiful. Storied. Prestigious. A school exclusively for the children of the richest, the most elite, and the most influential in the world, until today, when it receives its first transfer student: Hinata Akatsuki. Being outside of the upper class, she finds herself awestruck at just how massive and impressive the school grounds are, especially its crowning jewel: the Grand Garden, its flowers perennially in bloom thanks to the power of the Holy Blossom in its center.

Save for a bizarre, underground detour the moment she steps into the campus, she makes new friends quickly, beginning with her seatmate, Berune "Bell" Orenji. But tragedy strikes the next day as a mysterious, ominous miasma falls over the Grand Garden, making it wilt and wither. Shocked, saddened, and with a cloud of suspicion hanging over her head, Hinata volunteers to venture deep into the underground caverns beneath the school, to try to revive the Grand Garden, rescue the Holy Blossom, and figure out just what exactly had happened and how to keep this tragedy from repeating itself.

Gameplay is split into two sections:

Like its predecessors, Omega Labyrinth and Omega Labyrinth Z, the game is unabashedly Fanservice heavy, featuring all manner of contrived situations to explain all the many lewd and titillating situations the all-female cast find themselves in—of particular note is the fact is that Omega Power is stored in their chests, and collecting enough of it will make them grow larger, and to ridiculous extents come late-game.

Please direct all character-specific tropes to the Characters page.