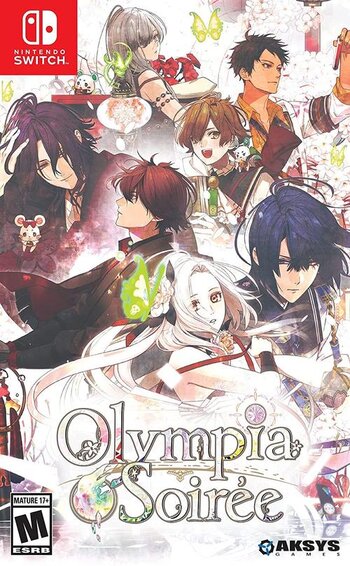 Olympia Soirée is a Visual Novel by Idea Factory and Otomate. It was first released in Japan on April 2020 for the Nintendo Switch and was later localized in English by Aksys Games on September 2021.

In the distant isle of Tenguu Island, there exists a society governed by a hierarchical color caste system. The Red, Yellow, and Blue colors are known as the "Primary Colors" and are the ruling class of the hierarchy. Below them are the "secondary colors": Purple, Green, and Orange. Those whose colors lie outside of the spectrum like Black however, are considered to be at the lowest rung of the caste and are automatically exiled underground to Yomi, where they are to never see the light of day again.

As the last and only surviving member of the enigmatic White clan on Tennyo Island, our heroine, Olympia (true name: Byakuya, though you can change this in the game proper), is tasked to perform a special ritual that brings light back to a world covered in darkness after a certain tragic event years ago. Having now turned 18, Olympia is on a quest to find her true love so she can continue her lineage in the hopes of restoring her fallen clan.