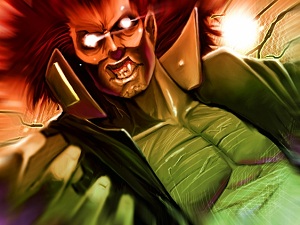 You so eager to buy the goddamn farm, suckah!? If not, you better GENUFLECT RIGHT NOW!
Advertisement:

OMGWTFOTL (Odious Manly Genuflection With Terrible Fury: Only True Lamentation) is a... special game about you getting to fight your nemesis, the man who raped your sister and scooped your best friend's eyes. The man's a beast, the strongest bancho in the land, but you shall fight him to the death. Maybe. With Karl Gotch's help. Or not. And then you'll confess your love to your childhood friend. Or watch bears screwing. Or you may simply [X] GENUFLECT.

Like Crimsoness, OMGWTFOTL is a very short Visual Novel (it can be completed in about 30 minutes), is so goddamn insane and over-the-top that it's inherently funny, and manages to make some sort of sense while making no sense at all. Unlike Crimsoness, though, the game manages to cross the line several times with its vulgar and bloody (and hilariously random) sense of humour.

Can be freely downloaded here