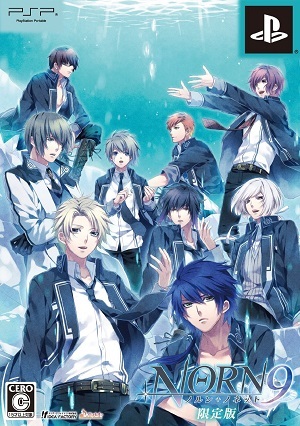 A young boy named Sorata Suzuhara is on a field trip when he suddenly finds himself whisked back in time to the Taisho Era. There, he meets a girl who displays the power of fire to keep him warm.

The two are soon picked up by a strange globe-shaped ship... and find themselves attacked by two of the other passengers. Once the misunderstanding is cleared up, Sorata learns that the girl and the other passengers are known as "espers - People who have power over things like plants, fire, water, etc.

The espers are making their way to The World, a mysterious entity that guides the nations of the world to peace. But there are people who don't want them to reach their destination. Worse yet, there might be a traitor among them.

Norn9 ~Norn + Nornette~ is a Romance Game produced by Idea Factory and Otomate featuring three protagonists - Koharu, the girl Sorata meets at the beginning, Mikoto Kuga, a mature and refined girl, and Nanami Shiranui, a quiet and stoic girl. It was originally released for the PlayStation Portable in 2013, and was given a Play Station Vita port subtitled Var Commons on 2014. A fandisc subtitled Last Era was released in 2015 exclusively for Vita, followed by another fandisc in 2016 subtitled Act Tune. The game was ported yet again to the Nintendo Switch in 2018 under the subtitle LOFN, containing both the original game and Last Era.

The PSV version was released in English on November 3rd, 2015 by Aksys Games. An anime adaptation began airing on January 7th, 2016 as part of the Winter 2016 Anime season.