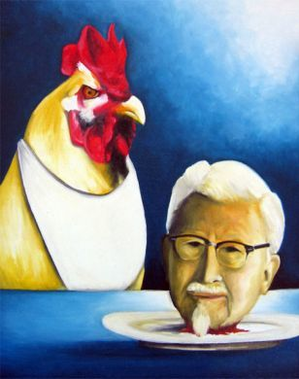 A dish best served with a side of potato salad.
Buzz Lightyear: I just want you to know, even though you tried to terminate me, revenge is not an idea we promote on my planet.
Woody: Oh, well, that's good.
Buzz Lightyear: [leans in, lowers to a whisper] But we're not on my planet... [grabs Woody's collar] are we?
Woody: No...
— Toy Story
Advertisement:

Vengeance. You don't get much of it in real life, and the little you do tends to be cold, late, and adds up otherwise as having been a really bad idea. So you look for it in fiction. Where you find out that, seven times in ten, revenge was a really bad idea for your surrogate, too. The other three times ... well, hey, somebody had to get some, sooner or later. That, and the girl. And a pony. With a jetpack.

Revenge at its core is a viciously personal form of Paying Evil Unto Evil. Someone has done something seriously bad to another person or someone that person loves, and for some reason, there's no justice to be had for the crime, so the characters set out to exact their own kind of justice upon the person or people responsible. Although, some characters may not care for justice or "getting even", but want the satisfaction that comes only from Disproportionate Retribution. This can be compounded when the harm is slight, like not getting invited to a party. Avenging a death may be regarded as Due to the Dead — and the ghost may agree.

An avenger has several options when pursuing his or her vendetta. He or she can devise a Machiavellian plan, maneuvering things (and occasionally people) in place until the time of final vengeance is at hand, which is the route taken by many classical revenge tales. Often the avenger takes steps to ruin the other guy's life in some manner before the final act, which may or may not end with the other guy's death. Another option, often chosen by action heroes or the more bloodthirsty avengers, is the Roaring Rampage of Revenge, where the avengers dispense with this and goes straight for the bloodshed, hunting down everyone who had anything to do with the crime in question and eliminating them one by one, often in a Gotta Kill Them All fashion, until they reach the Big Bad behind it all and take their final vengeance.

Kill Me Now, or Forever Stay Your Hand, Forgiveness, and Defeat Means Friendship may stop this vendetta. Finding the person and discovering they've become The Atoner can snatch it away from you. On the other hand, if they try to buy you off, they may still be fair game. May also invoke The Only One Allowed to Defeat You; if your enemy is defeated by someone else, how can you avenge yourself?

Sometimes, the people seeking revenge are doing so out of a subconscious sense of guilt and responsibility, or to cover up some other emotion like Survivor's Guilt (which often explains any Death Seeker behavior). Sometimes they've placed Revenge Before Reason. Bringing this out into the open can produce an interesting effect.

The character often finds that completing the revenge will leave his life feeling flat and empty. Revenge wasn't satisfying, or now that it's over, he doesn't know what to do with himself. Sometimes, during the course of the pursuit of revenge, the avenger becomes just as bad as, if not worse than, the one who committed the initial awful deed to begin with. Sometimes, the character will end up being held accountable by others for taking revenge just as much as the one who wronged him, and will likely face punishment for it. And sometimes, revenge doesn't end with the person who committed the crime — other people connected to the original villain may well decide to pursue vengeance against the original avenger, which may very well lead to a Cycle of Revenge.

Since revenge is one of the darker character motivations, villains, being a rather unforgiving lot, will often choose to take vengeance on those who have, in their eyes, wronged them, even if the "wrong" in question was something legitimately justified, such as stopping a villain's original evil plan and putting him behind bars or stopping an associate of his, which resulted in the associate's death. Villains in general are more likely to engage in Disproportionate Retribution than many heroes, and don't usually care about what happens to innocents that get swept up in the mess — some such villains deliberately target innocents who are connected to the person they want revenge on, just to make the person suffer all the more. Others target anyone who has anything to do with a certain organization responsible for what led them on this rampage, regardless of whether or not those people were actually involved in the crime in question, or take it out on the descendants of those who wronged them to start with. Others will broaden their vendetta to cover more and more people until the vendetta essentially covers all of humanity. This can be tempered, or even overridden, if the character keeps it up; killing the man who killed your father can be noble if he continues to slaughter people wherever he goes, and your revenge can be viewed as the icing on the cake. Villains can often be seen drawing on The Power of Hate in order to get their revenge as well.

On the other hand, revenge can also appear lighter in shade where it is not only sweet but understandable. If the provocation was extreme, and still more if the character is reacting quickly to circumstance, without time to think — as in The Dog Bites Back — the effect can be mostly sympathetic. It can also be sympathetic if the character's being partly motivated by the knowledge that the villain will go on committing such crimes, and by taking care to ensure that only the guilty suffer, and suffer no more than they deserve.