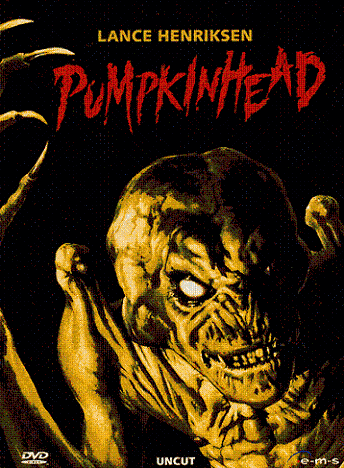 Eh, maybe a little pumpkin-like.
"Bolted doors and windows barred,
Guard dogs prowling in the yard,
Won't protect you in your bed,
Nothing will, from Pumpkinhead."
Advertisement:

Pumpkinhead (1988) was special effects guru Stan Winston's directorial debut and essentially deals with a monster that doesn't actually have a pumpkin for a head.

The quote above is said to be by Ed Justin and the inspiration for this movie making it possibly the only movie Based On A True Poem. Ed Justin was a guy in the movie marketing business who wrote the poem to spook his grandchildren, his friend and film producer Billy Blake loved it and thought it would be a great horror film, so bought the rights pretty cheaply and with producer Richard C. Weinman began looking for writers. Enter writers Mark Patrick Carducci and Gary Gerani, who had toyed around with an idea for a horror movie in the late seventies about a demon existing for each of man's sins, with the plan to make one about the demon of vengeance set in the backwoods (hence one of the film's taglines and it's alternate title, respectively). Carducci pitched the demon idea to Blake, who loved it and decided to merge it with the Pumpkinhead project.

The plot is actually the fairly common "Man summons demon to seek revenge" horror plot. It has the common hallmarks: teens from the city come out to the backwoods for vacation, one of them gets drunk and accidentally runs over a young boy on a bike, and the boy is the son of local grocer Ed Harley (Lance Henriksen), who becomes overcome with grief and rage and goes to a witch in the mountains to summon the demon of vengeance, Pumpkinhead. While Harley's son did deserve some justice, Ed takes it too far, wanting revenge on all of them, even the ones who merely witnessed it and the one who tried to help him. As Pumpkinhead goes about its task, killing the teens one by one in gruesome and violent ways, Ed gets flashes of the murders and sees the pain he's causing and regrets what he has set loose and sets out to try and stop it... but learns that vengeance has a powerful price.

Followed by one Direct to Video sequel (1994's Pumpkinhead II: Blood Wings) and two Made for TV Movies on Sci Fi Channel (2006's Pumpkinhead: Ashes to Ashes and 2007's Pumpkinhead: Blood Feud). There is also an FMV videogame based on the second movie, Bloodwings: Pumpkinhead's Revenge.

2018 brought with it a five-issue comic miniseries from Dynamite that poses an interesting question: if Pumpkinhead is a demon representing the sin of wrath, what if there were demons for the other six? And what if those other demons were mad at their 'brother' for getting summoned more often than them?