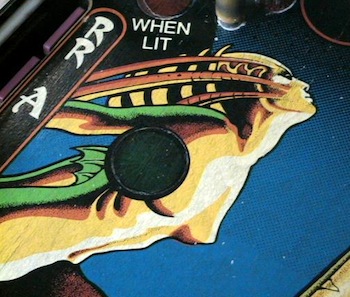 (Slightly more) anatomically correct for a fish.
[discussing a Londo Mollari doll being sold on the station]
Londo: It's a mockery. It doesn't even have any — ahem, attributes.
Sheridan: Attributes?
Londo: Do I have to spell it out for you?
— Babylon 5
Advertisement:

One of the common decency standards in comics, television, and other media is that aliens, monsters and other nonhuman creatures are never depicted with visible genitals, anuses, or nipples, even in scenes where such things should be plainly visible. This is helpful in conserving decency when the plot requires otherwise, but does the exact opposite if the nude in question is sufficiently humanoid, such as with Beast Men, Half Human Hybrids, or mutants, especially if they also possess certain other features like Non-Mammal Mammaries (which tend to come with the suggestion of breasts instead of actual ones) and/or are normally expected to wear clothes. Even when Censor Steam or dark shadows are present to preserve decency, a silhouette or outline of the character may reveal that there is... something missing....

In most cases, this concession of realism is a subtle form of censorship — not necessarily at the insistence of meddling managers or Moral Guardians, but also because not every artist wants to actually think about such anatomical details themselves, nudity taboo or otherwise. (It's too easy to joke about what could be misheard from the art department: "Bill, do these balls look right to you?" "Yeah, they're fine. Stop playing with them and work on the legs.")

It's also a function of the Law of Conservation of Detail, especially in literature where it is merely left to the reader's imagination instead of being explicitly pointed out by the narrator; indeed, it's rare to see anyone actually address the subject onscreen. If this subject is addressed, there are a few stock explanations that are used to explain it. The most common assumption is that the details are logically present, but are obscured beneath a layer of body fur or other Bizarre Alien Biology or, more usually, is simply not important to the situation/storyline/characters/audience (delete as applicable).

The nipples variant involves a female Civilized Animal, Funny Animal, or Beast Woman who has at least some definition to her chest, but doesn't have any visible nipples. They have either a subtle or distinct "puffing" of fur to their chests, a suggestion of breasts, or flat-out breasts. This can be justified if the nipples are hidden under the fur, but can be as much due to the Law of Conservation of Detail as censorship, especially for male animals because male nipples are not typically seen as taboo.

One way to subvert the genitalia side on a Civilized Animal, Funny Animal, or Beast Man is to give the character shaggier fur around the pelvic area. This simply implies that the character has genitalia, but their fur is covering it.

A subtrope of Anatomy Anomaly. Compare Animals Lack Attributes for anatomy (genital, anus, and nipple) censorship as it applies to (otherwise normal, real-life) animals in fiction, and Barbie Doll Anatomy for the censorship of humans. See also No Biological Sex, Funny Animal Anatomy, Ambiguous Gender, and Exposed Extraterrestrials. Contrast with Monster Modesty, where creatures wear shorts or other coverings even when it seems unlikely they would need to.

Fur Is Clothing, Removable Shell, and Eggshell Clothing (these usually being Played for Laughs) are a few ways it can be averted, and adding some Tertiary Sexual Characteristics can resolve things.