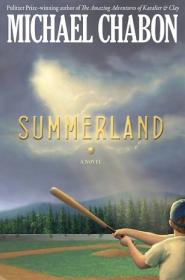 Summerland is a 2002 juvenile/young adult novel by Michael Chabon about a group of young children who seek to save the world by playing baseball. It interweaves elements of a parallel-universe road trip, The Quest and a World Series. It was a popular children's book.

Its less basic premise is this: Summerland is a magical place where the local Little League gathers to play baseball on a perfectly manicured lawn, and the sun is always shining in a flawless blue sky. However, the small beings known as ferishers, who ensure this perfect weather, are threatened by an ancient enemy and need a hero—a baseball star, in fact—to vanquish their foe.

The ferishers recruit Ethan Feld, possibly the worst ballplayer in the history of the league, as their leader. No one is more surprised than Ethan at their choice, but their faith spurs him on. Also, the prophecy of an oracular clam.

Accompanied by his friends Jennifer T. Rideout, a boy named Thor Wignutt who thinks he's an android named TW03, and a motley crew of creatures that includes a Sasquatch and a werefox, Ethan struggles to defeat giants, bat-winged goblins, and one of the toughest ball clubs in the realms of magic to save the Summerlands, and, ultimately, the world.