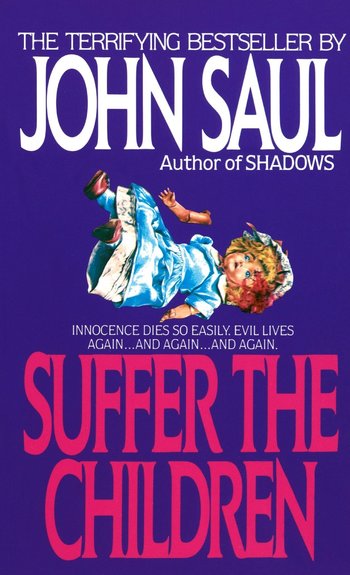 Suffer the Children is a 1977 horror novel by John Saul, his first published novel and the one that established his career (and for a while, his formula).

Exactly Exty Years Ago in Port Arbello, little Beth Conger was raped and murdered by her father, who promptly committed suicide out of shame and guilt...but not before concealing the child's body in a secret cave overlooking the sea. The scandal is permanently erased from the Conger family records and the cliffs around the cave become the subject of a Hereditary Curse, forbidden to all future generations of Congers.

20 Minutes into the Past, the few remaining Congers—Alcoholic Parent Jack Conger, his ambitious and frustrated wife Rose, and their two daughters—live alone at Conger Point as their family slowly falls apart. A year ago, Jack did something terrible to to their younger daughter Sarah, something that he can't remember. Sarah has been mute and schizophrenic ever since. The lack of trust between Jack and Rose, coupled with Jack's increasing alcoholism and the difficulty of managing Sarah, have left the family full of resentments.

Thank goodness for their elder daughter, thirteen-year-old Elizabeth: beautiful, kind, trustworthy, wise beyond her years, and endlessly patient with her strange younger sister.

But now Elizabeth has visited to the forbidden cliffs and discovered a secret in the cave above the sea—the secret of a lonely, betrayed, enraged little girl. Now Elizabeth is slowly changing. Now the village children have begun, one by one, to disappear. And the only one who knows the truth is a traumatized child who cannot speak.