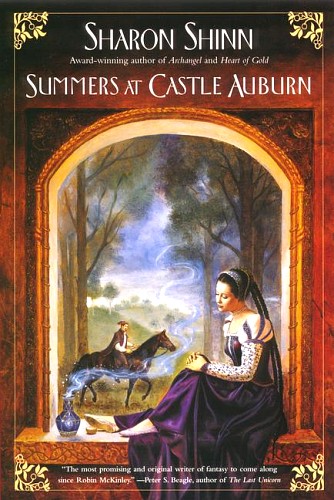 Summers at Castle Auburn by Sharon Shinn tells the story of Coriel, more commonly called Corie, a bastard daughter of the illustrious Halsing family. She lives a simple village life with her maternal grandmother, the local wise woman and witch, as her apprentice until she is six years old when the noble side of her heritage comes to call. Her father is dead, her uncle wishes to see Corie properly cared for. From that year, Corie spends her summers at Castle Auburn with her blue-blooded half-sister Elisandra.
Advertisement:

Life at the castle is a completely different world from village life. Elisandra is engaged to the crown prince, Bryan, and has been since they were infants. The marriage, and Bryan ascending the throne, will happen when he turns twenty, something that makes the nobles of the realm nervous as they've been doing well under the stern but steady guidance of the regent, Bryan's uncle Matthew. Corie's beloved uncle Jaxon is involved in the capture and sale of aliora, something that troubles Corie more and more as she grows older. And Corie herself is trained to be a young noble lady by Elisandra's mother, Greta, in hopes of using her to make a politically advantageous marriage.

To make matters worse, even Corie's life away from court is not without its complications as her grandmother takes on another student and Corie is falling behind in her magical studies when she leaves for three months every summer. Corie struggles to make sense of personal and political forces around her and not only stay adrift but to carve out a life she wants and protect her most-beloved sister.