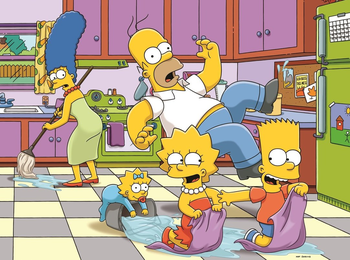 Mr. Bergstrom: Lisa, your homework is always so neat. How can I put this? Does your father help you with it?
Lisa: No. Homework's not my father's specialty.
Mr. Bergstrom: Well there's no shame in it, I mean, my dad—
Lisa: Not mine.
Mr. Bergstrom: You didn't let me finish—
Lisa: Unless the next word was "burped", you didn't have to.
— The Simpsons
Advertisement:

Born out of the Sitcom Dysfunctional Family, he's a deliberate subversion of the Standard '50s Father. Now so ubiquitous the older trope is nearly forgotten.

Although he's clever at times, he's not usually allowed to be smart. He has no idea that Shortcuts Make Long Delays. He's lazy, gluttonous and has miscellaneous other glaring vices. His children may love him, but they often don't respect him. However, he is still a sympathetic character; the source of his charm is his complete love and loyalty to his family, even if the main way he shows it is by fixing problems he caused himself.

His family is made up of at least one child nearing or in their teenage years, and a wife (usually much prettier than Dad) who spends her time Parenting the Husband. If he has one or more teenage daughters, at least one will be a Bratty Teenage Daughter or a Daddy's Girl; whether they are or not, the dad will be an Overprotective Dad in regards to the girl(s) — and quite often Amazingly Embarrassing to the girls and the boys alike.

Naturally, filled with Unfortunate Implications, and often used as an enabler of several double standards. Sometimes, on the rare occasions that a mom does something dumb, she's cut more slack than she otherwise would be, since the bumbling dad is there to make her look better by comparison. The frustrating and stagnant gender roles enforced by this trope are often pointed to as an example of sexism against men. On the other hand, this trope doesn't let female characters off so good either. For example, if everyone's used to tolerating Dad's incompetence, they might still hold Mom to the standards of a competent adult. In fact, she may end up being held responsible for Parenting the Husband and fixing his screw-ups. After all, somebody's got to be the grownup in a family, and you can't hold Dad accountable for not acting like one if he's just an idiot.

This trope is still mostly seen in sitcoms and cartoons, along with many commercials, especially ones aimed at kids. In anime, this type of character is taken more respectfully, since it usually consists of a goofier dad, more involved with his family than the stereotypical Salaryman. This is even more common when his children have no visible mother.

This is an example of how a Subverted Trope can end up becoming the norm. Back in the day, fathers were assumed to be wise and in charge, and the bumbling dad was something fresh and unusual—which was arguably what made it so funny in the first place. Today, sitcoms have made bumbling dad an Undead Horse Trope, and consistently competent fathers are a comparative rarity.

Roger doesn't even know what GrowCo does, despite still being completely convinced that it will rise again.
Roger: Hey, the stock today raised up a point! Time for some champagne!
Andy: (facepalming) With only a net loss of-
Roger: (interrupting) Who cares about nets? Tennis players! And fishermen! I don't care about nets!