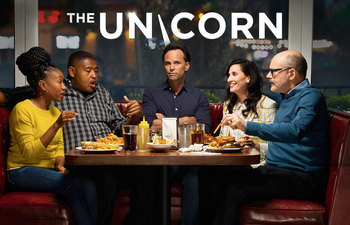 The Unicorn is a CBS Dramedy series that premiered in 2019, starring Walton Goggins, Rob Corddry, and Michaela Watkins.

Wade is a widower with two daughters who thinks he's been doing a good job dealing with his grief in the wake of his wife's death. His friends, meanwhile, see that he's barely holding it together and want to help him move on.

When the floodgates finally open and Wade begins making tentative steps towards the next phase in his life, his friends urge him to capitalize on his status as a "unicorn": a middle-aged man with a stable home life who isn't single as a result of divorce.

The show was cancelled after its second season.