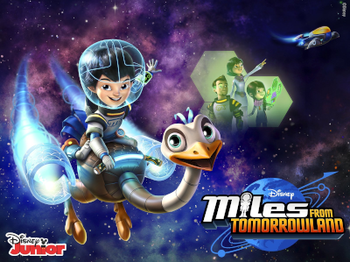 Miles from Tomorrowland is a preschool series that premiered on February 6, 2015 on Disney Junior.

It centers on the Callistos, a family who lives on a spaceship and works for the Tomorrowland Transit Authority, where they travel the galaxy to solve conflicts and mysteries on other planets. There's the enthusiastic and curious Miles, his brainier sister Loretta, his pet robot ostrich M.E.R.C., and his parents Leo and Phoebe.