Film / Joe Versus the Volcano 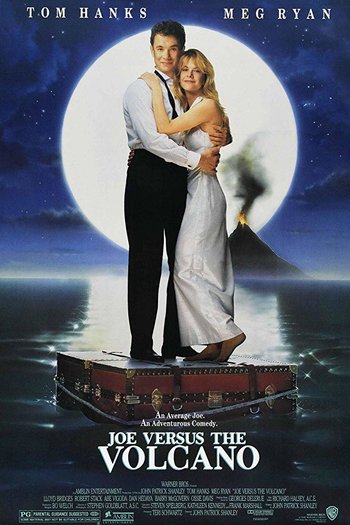 Joe Versus the Volcano is a 1990 Romantic Comedy film starring Tom Hanks and Meg Ryan in their first of three screen pairings (followed by Sleepless in Seattle and You've Got Mail). The film has a surreal, stylized tone befitting a fairy tale, with the fantastical and the mundane juxtaposed for comedy and pathos.

Hanks plays Joe Banks, a miserable everyman in a dead-end job with a Bad Boss. To make matters worse, Joe is diagnosed with a mysterious "brain cloud" that will kill him in six months. Enter Eccentric Millionaire Samuel Graynamore (Lloyd Bridges), who is trying to acquire the rights to a rare mineral on a South Pacific island. The natives will only give him the mineral rights if he finds a hero to Appease the Volcano God for them. The millionaire hires Joe, who agrees to jump into the volcano at the end of a month of living it up on an all-expense-paid voyage. Hilarity Ensues.

A notorious flop when it was released in 1990, but in the years since it's been Vindicated by History to some extent. Written and directed by John Patrick Shanley, who would have to wait 18 years for his next directing gig, the film adaptation of his Pulitzer Prize-winning play Doubt.

You can feel his passion for luggage pulsating even though he neve raises his voice.

You can feel his passion for luggage pulsating even though he neve raises his voice.