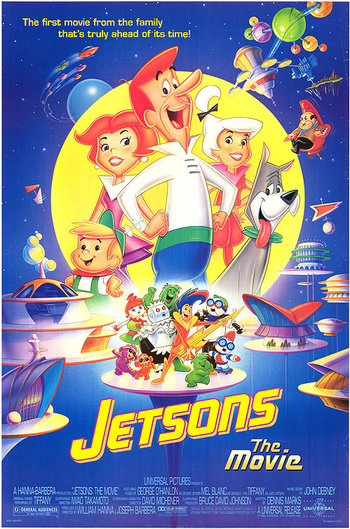 The Movie of The Jetsons, naturally enough. It was released in 1990, following the 1980s revival of the series, and bombed at the box office, killing the franchise for the next twenty-seven years. The franchise was ultimately revived (again) with The Jetsons & WWE: Robo-WrestleMania! in 2017.
Advertisement:

The plot of Jetsons: The Movie basically involves George Jetson uprooting his family to take a job on Mr. Spacely's new asteroid mining colony, where the mining plant keeps malfunctioning for some mysterious reason. Meanwhile, the two Jetson kids have their own subplots. Judy is heartbroken over having lost her terrestrial musician boyfriend Cosmic Cosmo, but soon replaces him with her new extraterrestrial musician boyfriend Apollo Blue. Elroy develops a rivalry and then a friendship with a Robot Kid named Teddy-2.

Jetsons: The Movie reunited nearly all of the original cast members save for '80s pop starlet Tiffany voicing Judy Jetson thanks to Executive Meddling and Patric Zimmerman taking over for the late Daws Butler as Elroy. The film also marked the last performance ever of noted voice artist Mel Blanc (Mr. Spacely), who was still recording while in the hospital (as he had years before then), as well as George O' Hanlon (George), who by that point had to have the lines read and acted to him before recording (both passed away before completing the film and sound-alike Jeff Bergman filled in the few remaining scenes). The film was dedicated in memory of both men. And although she lived until 2003, Penny Singleton (Jane) also ended her acting career with this movie. Meanwhile, prolific Hollywood composer John Debney made his feature debut here.

The exterior of Mr. Spacely's asteroid mining complex is created with early CGI

The exterior of Mr. Spacely's asteroid mining complex is created with early CGI