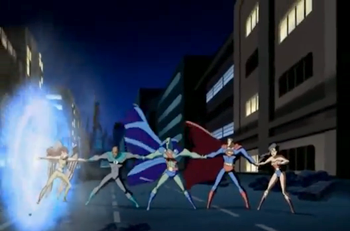 Take My Hand! meets The Power of Friendship.

Essentially, one person falls off a cliff to their certain death. However, just before they slip out of reach, another character catches them. Then, as they start slipping, another person catches that person, then another holds onto them, and then... well, you get the idea.

Human Ladder is a similar trope. Not to be confused with a Chain of Deals.